Firefighting is inherently a dangerous profession. During routine activities firefighters face numerous hazards, some known and some unknown. One of the greatest risks facing firefighters today is cancer. This may be due to the changing landscape of building materials. The legacy finishes in buildings of yesteryear have been replaced by synthetic materials of today. Many of these burn hotter and faster and also produce larger quantities of thick toxic smoke.

Most firefighters are now aware they have a 9% greater risk of contracting cancer and a 14% greater chance of dying from cancer. Emerging research suggests that dermal absorption of toxins is a greater route of exposure than inhalation or ingestion.

The famous Chief Alan Brunacini once said, “There are two things firefighters hate. The way things are and change.” The culture of the fire department is critical in determining whether change will occur and how well it occurs. While no one is pro-cancer, the culture of a fire department may suggest they are willing to accept the risks they face on the fire ground and after the call by not removing the products of combustion from skin.

One factor which may contribute to this is the latency period of cancer. If there is not a direct correlation between the action (or lack thereof) and the consequence, change is not likely to occur. This leads to normalization of deviance which occurs when there is no immediate catastrophic consequence of an action. A second factor which may contribute to this is the desire to fit in. If the department is not setting the standard, and more importantly the company officer isn’t setting the example, it’s harder to effect change.

Recognizing this, what can individuals do to implement a decontamination habit and increase the odds of success? By utilizing the four laws in “Atomic Habits: An Easy & Proven Way to Build Good Habits and Break Bad Ones” you can transform your behavior to increase the likelihood you will implement a successful personal decontamination wipe protocol.

The first step in a habit loop is the CUE. A cue is anything that gets your attention and tells you what to do next. It predicts a reward. CRAVINGS are the second step. They are the motivational force behind every habit and without them we have no reason to act. These first two steps compromise the “Problem Phase.” The third step of a habit loop is the RESPONSE. This is the actual habit you form, the action you perform (in this case, decontaminating). The final step that closes the loop is the REWARD. This is the end goal of every habit. These last two steps form the “Solution Phase.” 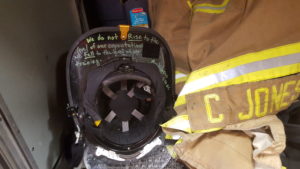 The process of changing a behavior starts with awareness. You need to analyze, and perhaps document, your current decontamination protocol. What is the first thing you do when you come out of the fire? What do you do after you remove your breathing apparatus? What do you do just before you climb back into the engine to head back to the station? By becoming AWARE of your habits, including the time at which you are performing the habit and where you are performing the habit, you raise them from an unconscious level to a conscious level.

A second strategy is to pair the new habit with a current habit. Habit stacking works by finding one you have already mastered and concisely tying the new behavior into it. For instance, “As soon as I remove my SCBA, helmet, and hood I will use decontamination wipes to remove soot from my hands, face, neck, jaw, ears, arms, underarms, and wrists.”

To increase your odds of success, try designing your environment to provide multiple cues. Considering over half of the brain is directly or indirectly devoted to processing visual information, a visual cue may be the most important tool to making a new habit obvious. Try placing a sticker that reads “Did You Decon?” in a location where you will see it before climbing back into the rig. 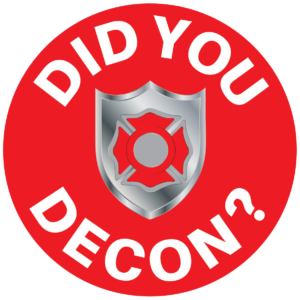 This can create a big shift in WHAT you DO.

Desire is what drives most behavior. The more attractive an opportunity is, the more likely it is to become habit-forming. If you anticipate that a particular habit will be rewarding, you are more motivated to repeat that action.

In order to make a post-fire skin decontamination more desirable you must feel satisfied after utilizing the wipe. Therefore, it is important to find a brand that you find appealing, from the packaging to the way it smells, to how clean you feel when you are done. Feeling satisfied after using the wipe will make the habit more enticing in the future. However, the inverse is also true. If you use a wipe you don’t like, you are much more likely to not use the product the next time. If the department is choosing the brand, they would be wise to allow field testing with multiple personnel to find a brand the firefighters are likely to use.

Another way to make the new habit more enticing is to pair an action you need to do with one you want to do. This is known as temptation bundling. When you’ve been fighting a fire, you are hot, tired, and thirsty. The first thing you want to do is get into rehab, cool down, and get a drink. If you pair your on-scene decontamination with your rehab routine, chances are you will perform it with more regularity. As you enter rehab and have your bottle refilled, your next step should be immediately wiping down your skin, especially before you ingest any food or drink.

As we mentioned earlier, the desire to fit in within the fire service is strong. When we are unsure how to act, we look to the group we are a part of for clues. If our behavior is rewarded with approval, praise, or respect, it becomes more attractive. Therefore, it is critical that influencers within the department, particularly the company officers, model the decontamination protocol.

While making a new habit attractive is one strategy, making a bad habit unattractive is another approach. When you highlight the benefits of avoiding a negative habit is becomes less desirable. The Boston Fire Department has employed this technique in their Memorial Wall, honoring the lives of the members of their department who have died in the line of duty, with photos of the ones who have passed from occupational cancer in black and white. It is an incredibly compelling tactic, one that is hard to ignore.

According to Voltaire, “Best is the enemy of good.” The key to mastering a habit is to start with repetition, not perfection. You may not have all the details of the decontamination protocol figured out, you just need to start practicing it. The more frequently you perform the behavior, the more automatic it will become. For instance, if you decontaminate EVERY TIME you remove your helmet, facemask, and hood, soon you will be decontaminating without even thinking about it.

The more friction there is to engaging in a behavior, the less likely you are to act on it. Therefore, two other critical components in this third step of the habit loop are to make it convenient and to prime the environment. If your department uses a decontamination bucket, at the beginning of every shift make sure the necessary components are in the bucket – wipes, a hose, a nozzle, cleaning detergent, a scrub brush, and clear bags for dirty gear, etc. Place the bucket in a location where it is likely to be seen and utilized. Upon return to the station after a call, the bucket should be immediately reset after personnel and gear are fully decontaminated.

The final step of the habit loop is to make it satisfying. While the first three steps – make it obvious, make it attractive, and make it easy – increase the likelihood that the behavior will be performed the first time, making it satisfying increases the likelihood it will be repeated. Additionally, and not surprisingly, the highest value is placed on instant gratification, not on future gratification. You are much more likely to remember the end of an experience rather than any other phase, so making the end of the habit enjoyable will reinforce the behavior.

This can be accomplished in multiple ways. First, as stressed earlier in the article, chose wipes that you find pleasing. If you feel you are cleaner, smell better, and feel fresher, the positive sensory perception makes it easier to adopt the habit. The pleasure sends a signal to your brain to repeat this behavior.

Using a habit tracker can also provide instant gratification. For instance, if you use an app to track your exercise you are actually engaging in multiple steps in the habit loop – it is obvious (the visual cues of multiple workouts marked on a calendar), it is attractive (each “win” of a workout shows forward motion and feeds your desire to not break the streak), and it is satisfying (it feels good to accumulate the checkmarks of a workout and this becomes its own reward). There are multiple exposure reporting systems available to the fire service such as NFORS (National Fire Operating Reporting System) Career Diary and Enviage’s Exposure Tracker. By utilizing one of these exposure reporting systems on an individual level, not only are you documenting critical information should you ever be diagnosed with an occupational illness, but you can use them to track your preliminary exposure reduction habits.

It’s easy to prevent a bad habit (not decontaminating) by making it unsatisfying. This is most easily accomplished by having an accountability partner, and in the fire service, the company officer is the most likely candidate. Because of the strong desire to fit into the brotherhood of the fire service, firefighters care deeply what others think of them. If the company officer, or another mentor, is modeling appropriate behavior and habits and calling out the members that do not, the probability of complying with a decontamination protocol is much greater.

Good habits can be hard to build. Bad habits can be even harder to break. If you employ a system that follows the four behavior laws of Cue, Craving, Response, and Reward to implement a post-fire skin decontamination program you are more likely to stick with it, even if your department doesn’t encourage one. When this becomes habit, you are taking steps to ensure you reduce your risk of occupational illness so you can have the chance to live a healthy life, long into retirement!